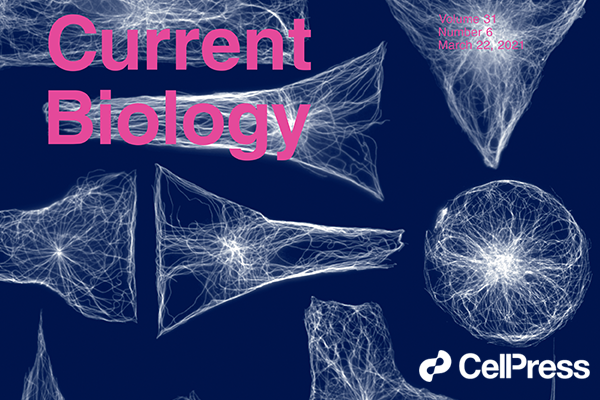 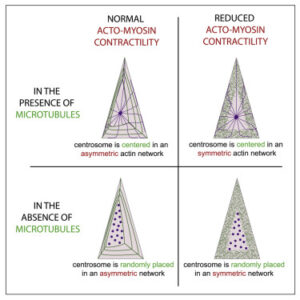 The centrosome is the main organizer of microtubules and as such, its position is a key determinant of polarized cell functions. As the name says, the default position of the centrosome is considered to be the cell geometrical center. However, the mechanism regulating centrosome positioning is still unclear and often confused with the mechanism regulating the position of the nucleus to which it is linked. Here, we used enucleated cells plated on adhesive micropatterns to impose regular and precise geometrical conditions to centrosome-microtubule networks. Although frequently observed there, the equilibrium position of the centrosome is not systematically at the cell geometrical center and can be close to cell edge. Centrosome positioning appears to respond accurately to the architecture and anisotropy of the actin network, which constitutes, rather than cell shape, the actual spatial boundary conditions the microtubule network is sensitive to. We found that the contraction of the actin network defines a peripheral margin in which microtubules appear bent by compressive forces. The progressive disassembly of the actin network at distance from the cell edges defines an inner zone where actin bundles were absent, where microtubules were more radially organized and where dynein concentration was higher. We further showed that the production of dynein-based forces on microtubules places the centrosome at the center of this zone. In conclusion, the spatial distribution of cell adhesion and the production of contractile forces define the architecture of the actin network with respect to which the centrosome-microtubule network is centered.
–>Read more

Any cookies that may not be particularly necessary for the website to function and is used specifically to collect user personal data via analytics, ads, other embedded contents are termed as non-necessary cookies. It is mandatory to procure user consent prior to running these cookies on your website.